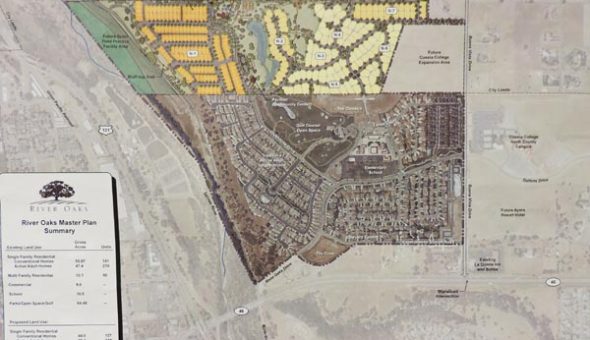 Several months back I had the opportunity to meet Dick Wilhoit, the developer of the River Oaks Community. He and his son Wes Wilhoit took a couple of hours to review their development and proposal for more homes on the north side of town. It was a well-thought-out plan that will make for a wonderful new community in Paso Robles. Because the family owns River Oaks Hot Springs, an advertiser in our Visitors Guide and Paso Robles Daily News, I recused myself from speaking publicly on the matter or voting on it when it came before the commission. Otherwise, I would have supported it along with my fellow commissioners. Here is some more information about the project:

The Paso Robles Planning Commission on Tuesday night unanimously approved plans for an large expansion to the River Oaks community on the northeast side of town near the River Oaks Golf Course. The plans will be forwarded to the city council for final approval.

The River Oaks project proposal includes expanding the existing neighborhoods to the north of the existing development. It includes up to 271 new home sites, including an extension of the “Traditions” active adult/senior neighborhood with 144 units, and extensions of the “The Classics” and “Vineyard Estates” with a total of 127 units. The conceptual plans include additional open space areas, more intensified development of the Pavilion & Spa, a “neighborhood farm” area, and walking trails. This would require amendments of the General Plan Land Use Designation and zoning from Agriculture to Residential Single Family, as well as an amendment to the Borkey Area Specific Plan. 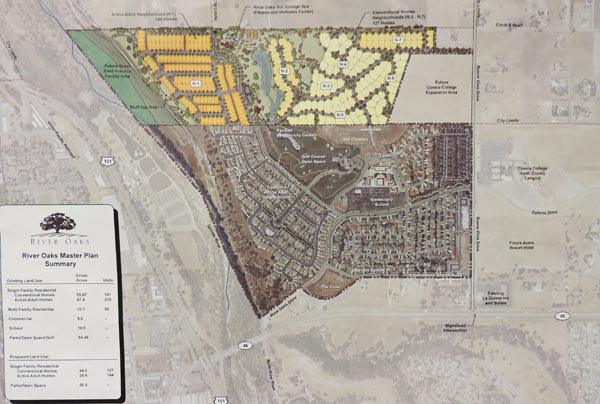 “They all work together,” said proprietor Dick Wilhoit. “Technically what its referred to is a ‘NORC’ a Naturally Occurring Retirement Community…as your lifestyle changes, family makeup changes, you literally can live through all of this.” The community was designed to contain small cottages, mid-sized and larger sized lots, and also senior neighborhoods. The lot for the first part of the River Oaks community was originally purchased in 1992.

The improvements to the existing infrastructure include the addition of an amphitheater on the lake, and an open air pavilion open on three sides that can host 200 people. They will expand the spa and add fitness and tennis and pickle ball courts as well as two pools; one will be the warm mineral water, the other will be a fresh water pool. The existing neighborhoods will be able to opt in to pay a proprietary fee to use the new facilities. Wilhoit said that the specifics of the improvements to the community areas, such as creating an open air pavilion rather than a smaller, enclosed space, came from the knowledge gleaned from the existing community spaces.

The project will have to pay development impact and building fees that will go to building infrastructure such as roads and help pay for the Nacimiento Water project. The average per unit water connection fee in Paso Robles is $23,500 per unit. They will also be charged a wastewater facility fee and other charges, totaling on average $63,000 per home for residential building fees.

The River Oaks Spa will remain open, during the expansion, “that is the intention,” said Wilhoit, the exact logistics of how they will remain open are still being determined.