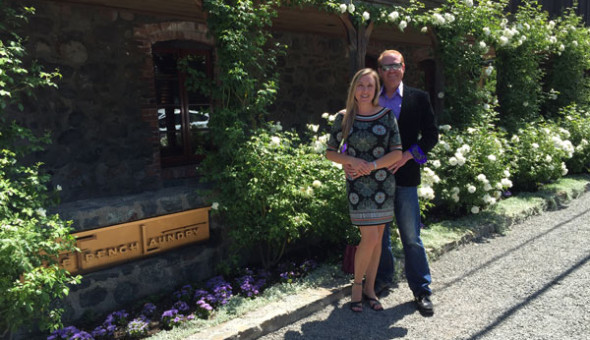 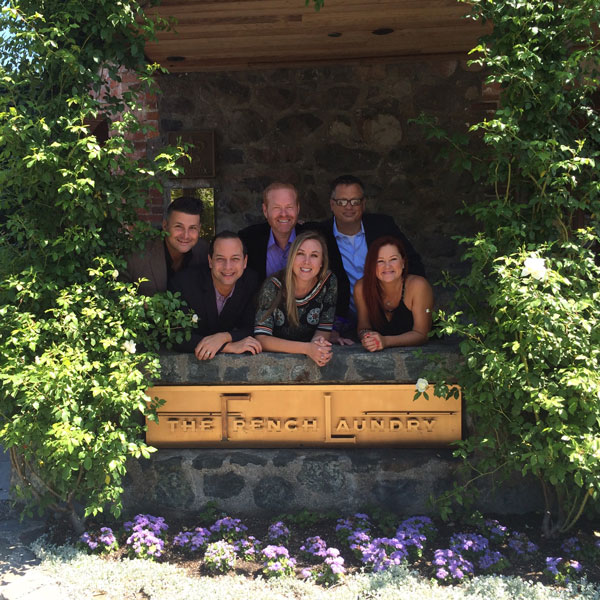 Matt, Charlie, Scott, Beth, Geoff and Brenda enjoy lunch at the The French Laundry for Brenda’s birthday during our Napa Valley vacation. Here is a re-cap of the French Laundry menu from our amazing meal on Saturday, June 13. The photos were taken by Brenda, Beth and me.

The French Laundry is frequently honored by inclusion in the annual Restaurant Magazine list of the Top 50 Restaurants of the World, having been named “Best Restaurant in the World” in 2003 and 2004. It received a favorable review in The New York Times and was called “the best restaurant in the world, period” by Anthony Bourdain. Source: Wikipedia. 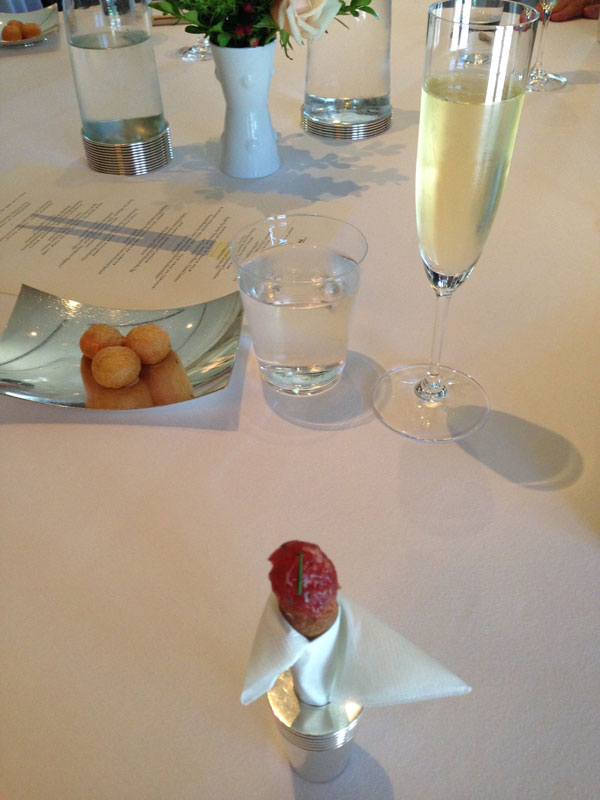 After being seated in the upstairs dining room, we ordered a bottle of champagne. We were then served two amuse-bouches. The first was an Ahi tuna tartare treat on a tiny ice cream cone and the second, in the upper left of this photo, is a puff pastry with a cheese filling. This began our delicious adventure into the The French Laundry menu. 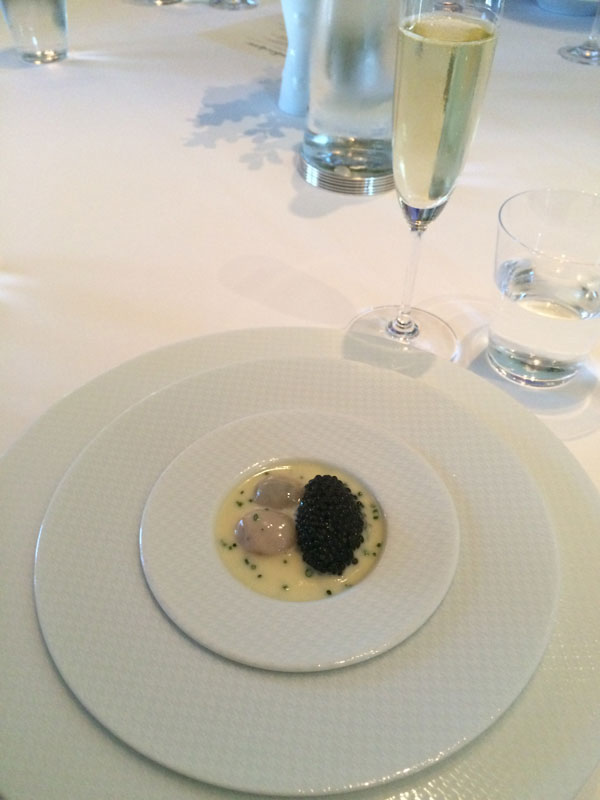 Our first menu item was Oysters and Pearls. It’s described as a saboyan of pearl tapioca with Island Greek Oysters and white sturgeon caviar. This was a delicious salty and savory dish. The French Laundry menu is a prix fixe, price-fixed menu, not including the cost of “supplements” for upgraded menu items. For a little extra, we could have had a Royal Ossetra Caviar item, rather than the white sturgeon. 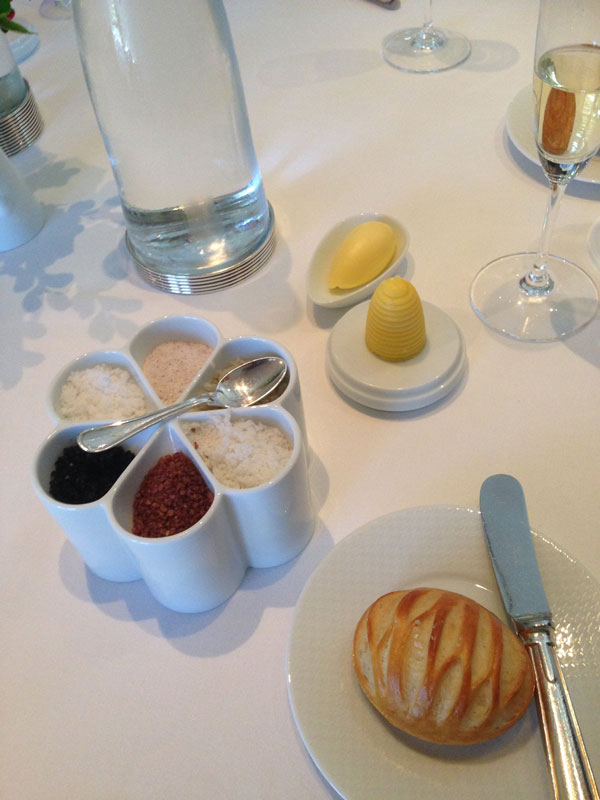 The bread, butter and salt selections were some of the tastiest treats of the meal, I think we all agreed. The fresh made bread was soft, flakey, crunch and tasty. They offered two local butters and a selection of six salts from around the world. 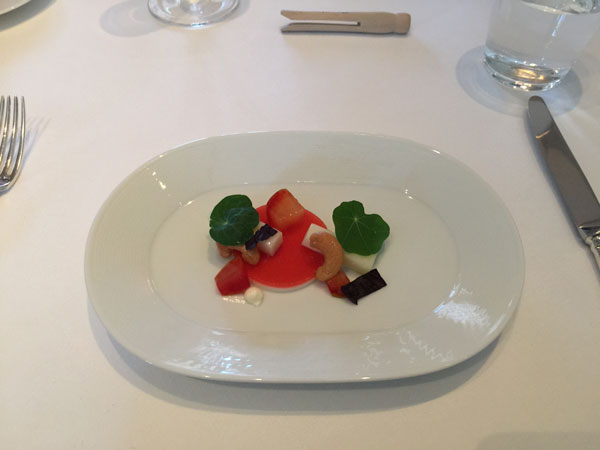 The second course of the menu was Hawaiian Hearts of Peach Palm – Purple top turnip panna cotta, Santa Rosa plums, toasted cashews and garden shiso. The menu certainly challenged my culinary lexicon, so it was fun to learn about new foods and preparations. Shiso is a Japanese herb, for example. 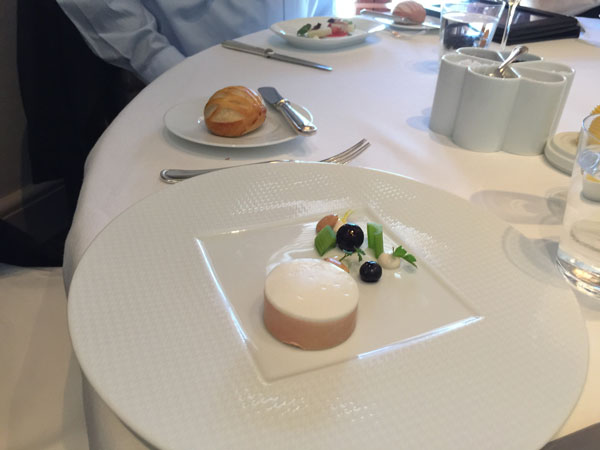 Charlie ordered a Foie Gras Au Torchon for his second course, which we all enjoyed a  taste of. It’s described as poached blueberries, celery branch salad and Marcona almond butter. 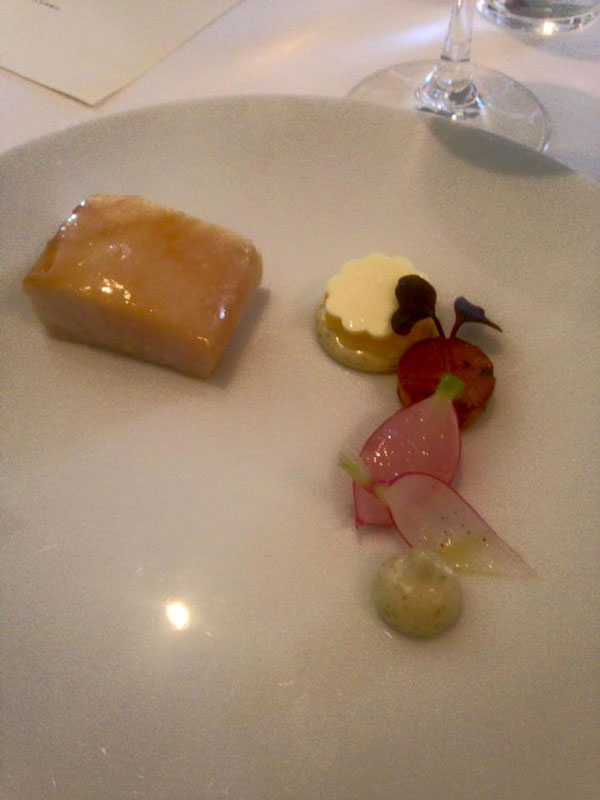 Our third course on the menu was Applewood Smoked Sturgeon with garden radishes, Amorosa potatoes, hard-boiled bantam hen egg and Spanish caper mayonnaise. The menu plates come in tiny portions. But with so many, they fill you up. If you aren’t careful, the dessert items will definitely overstuff your waistline. 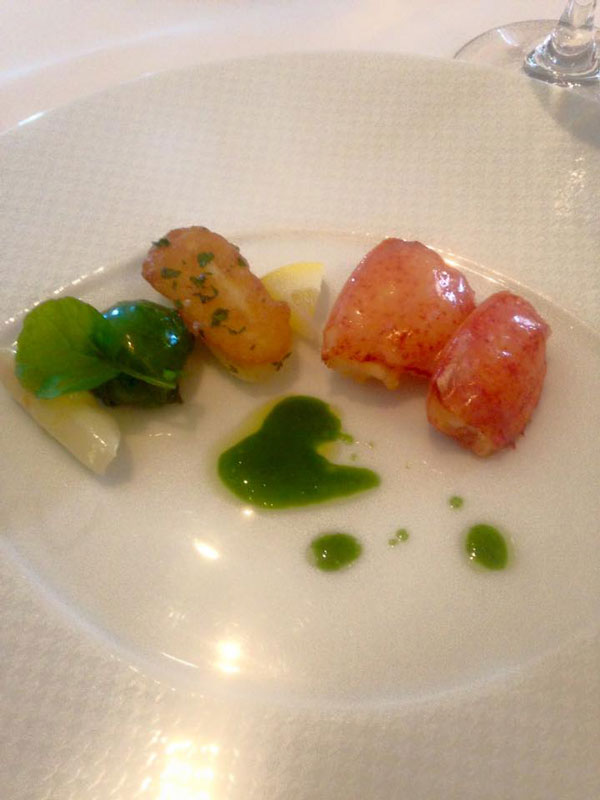 Our fourth course was Sweet Butter Poached Maine Lobster  with Holland white asparagus, preserved Meyer lemon, creamed Arrowleaf spinach and watercress. This was one of my favorite courses. 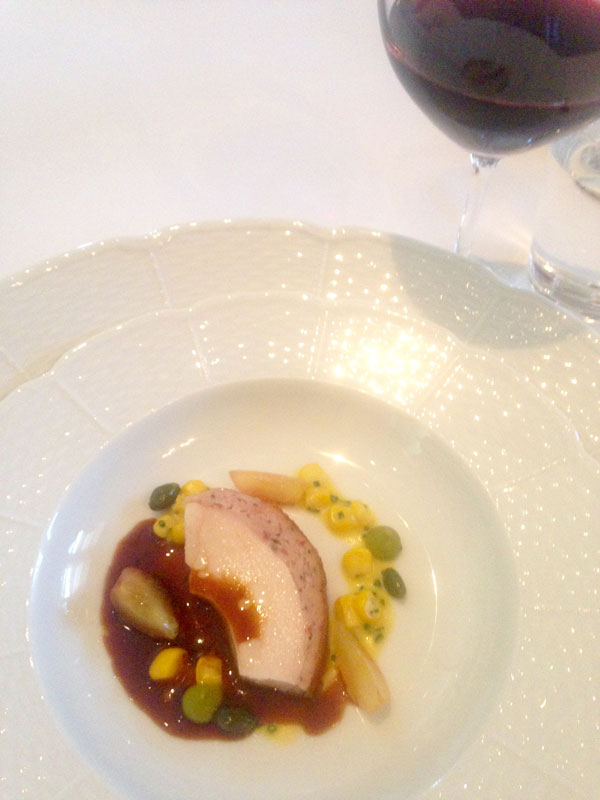 The fifth course we were served was Four Story Hill Farm Poularde with Brentwood corn, Ranier cherries and Sicilian pistachios jus. Poularde is a fancy word for a young chicken hen. This was a very tasty dish. 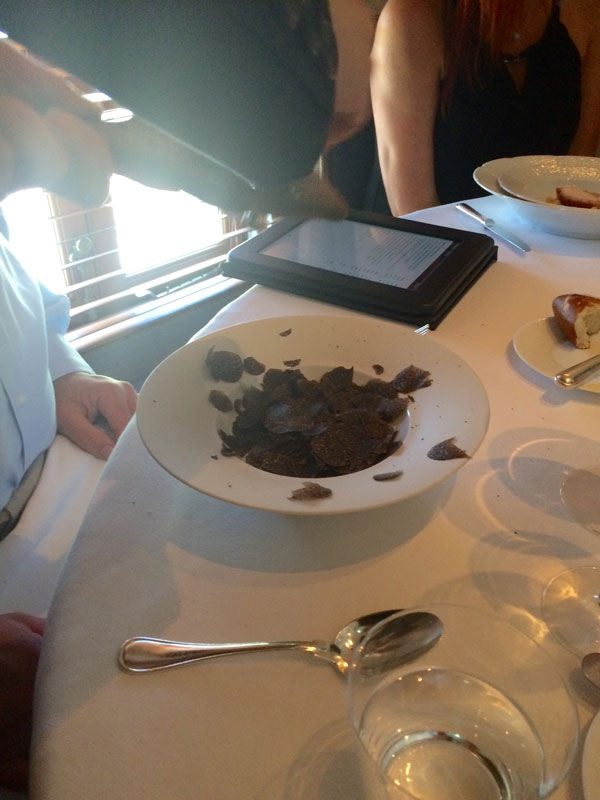 Geoff ordered an alternate dish for his fifth course, Macaroni and Cheese. It’s a little hard to see under the mountain of freshly shaved truffle slices. It’s described on the menu as hand-cut macaroni, Hobbs bacon, romaine lettuce, Parmigiano-Reggiano and shaved Australian black winter truffle. It was a new and outstanding delicacy for me to taste. I really enjoyed the new flavors. The iPad in the photo is the wine list. 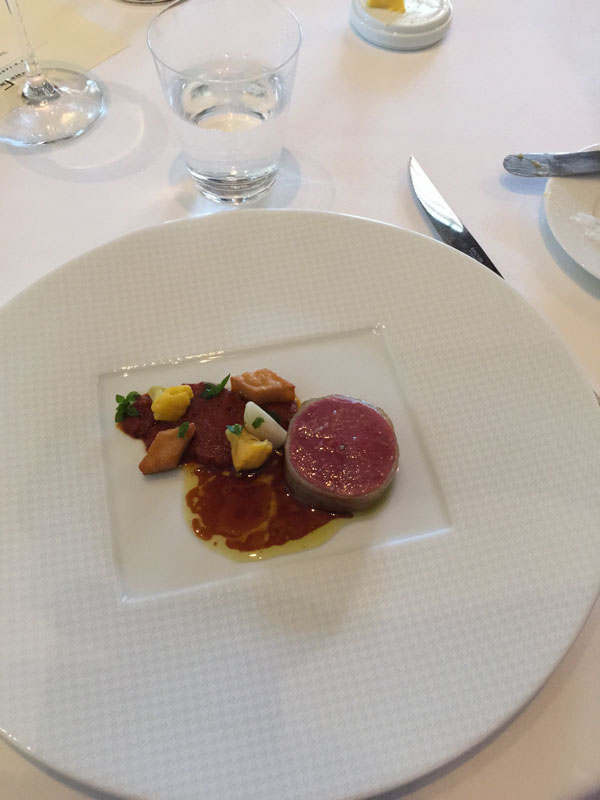 Our sixth course of the meal was Herb Roasted Elysian Fields Farm Lamb with spiced tomato conserva, cauliflower, chickpea “Panisse,” garlic confit and fino verde basil. The chickpea bread was very interesting and tasty and the meat was a winner as well. 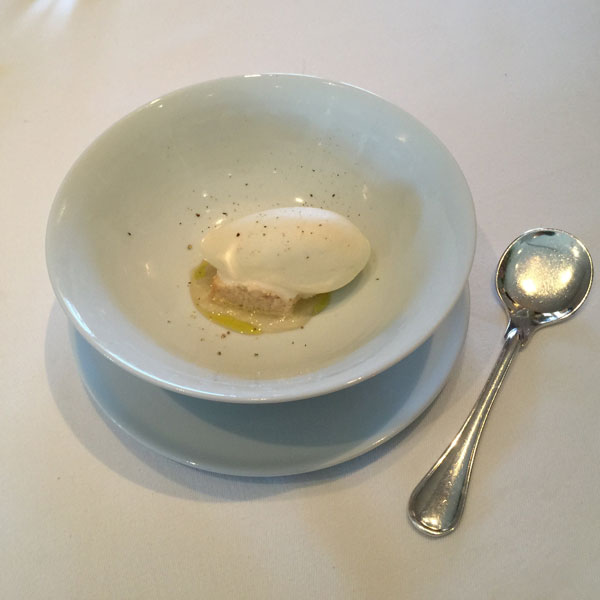 Desserts begin! I think this is were we lost track of how to count the courses because there were so many rounds of delicious treats to indulge our senses. We started with this homemade ice cream served with a lemon sauce. We also had a cheese course that was snuck in before the desserts. 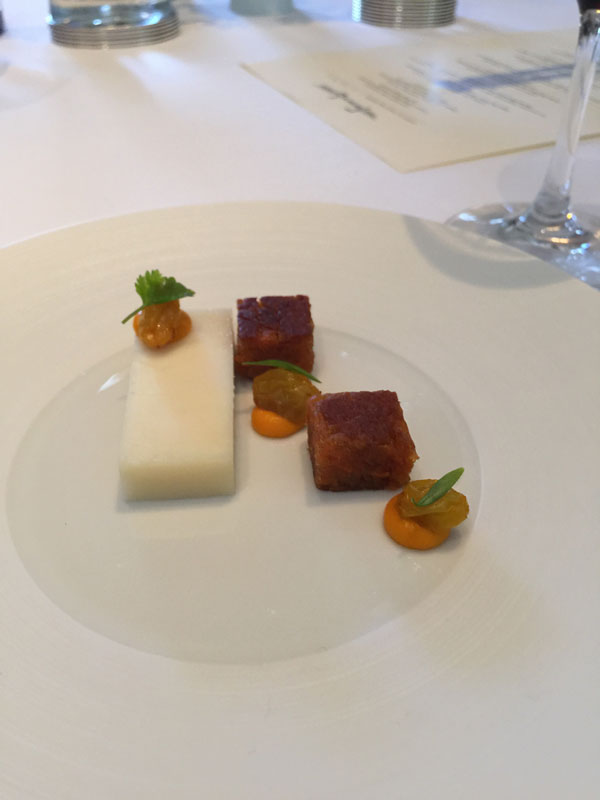 My favorite dessert was this deconstructed cheese cake with a piece of cheese, carrot puree and crispy cake crust. Just put it together in your mouth for a flavor explosion. 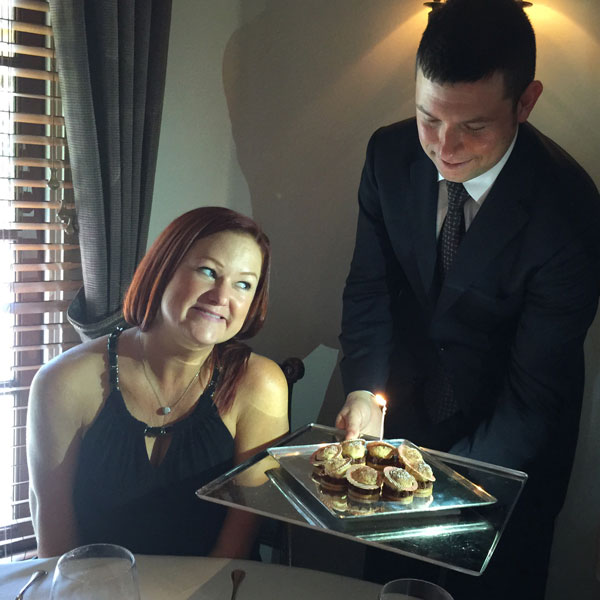 Brenda got a special happy birthday serenade from us and a plate of scrumptious chocolate cream puffs to share. 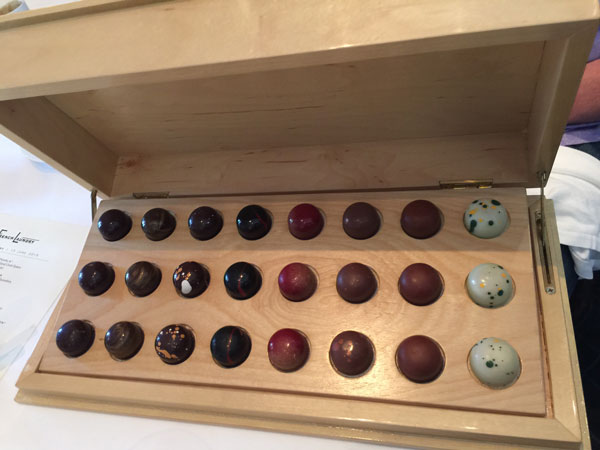 We each selected a handmade chocolate truffle. I chose the praline and chocolate confection. It was delicious. 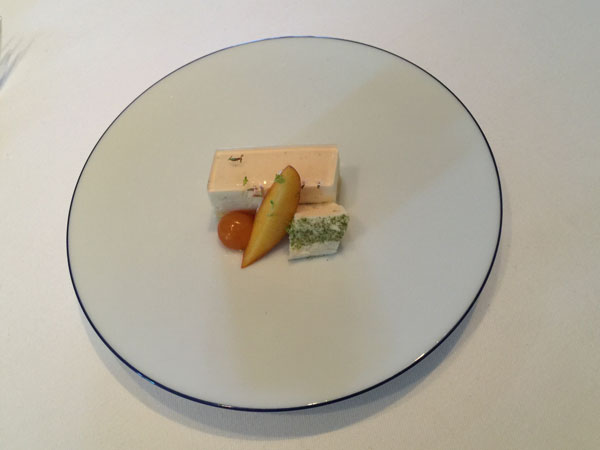 The French Laundry’s version of a cheese cake with fruit. 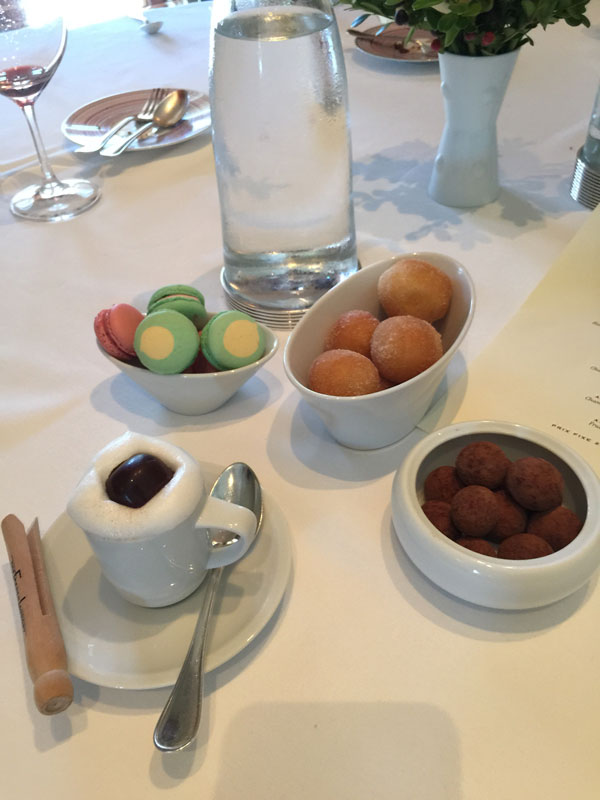 The final foursome of coffee ice cream in the demitasse, macaroons, donut holes (I’m sure there was a fancier word) and chocolate-covered macadamia nuts. Wow, The French Laundry menu left us all incredibly satisfied and with full bellies. 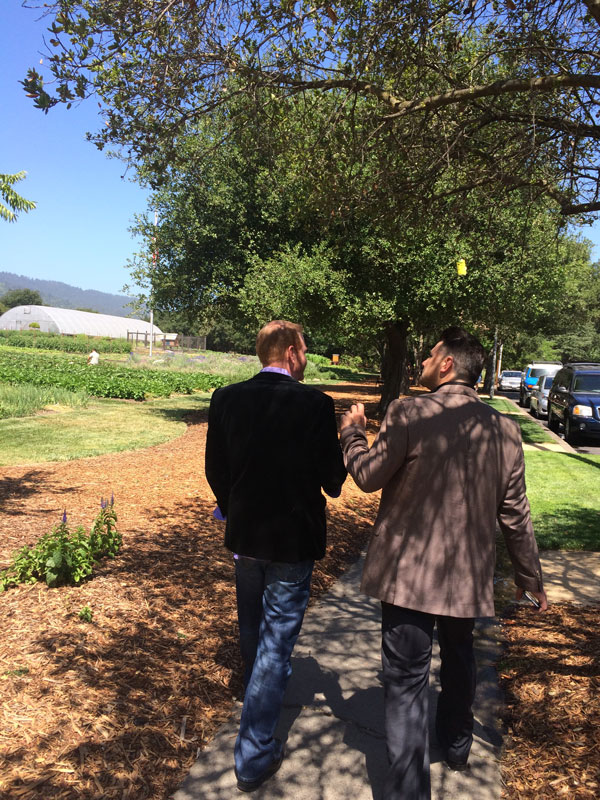 Matt and I take a stroll next to The French Laundry’s garden across the street from the restaurant. The coat I’m wearing was borrowed from the closet of the house we rented, VRBO, for the weekend. I found out at the last minute that coats were required for seating at the restaurant, so I struggled to find something. It was a little small, but worked fine.

In conclusion, The French Laundry menu was superb and enjoyable. Service was impeccable. The variety of new tastes was amazing. The cost of the meal was overpriced, to say the least, but worth it for a bucket list kind of meal. Enjoy!