How I conquered death 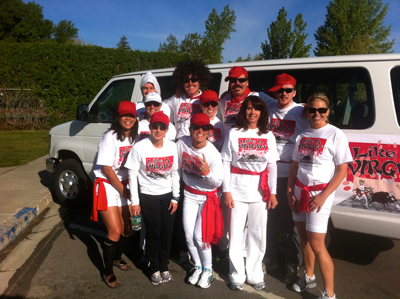 I’m gearing up for a repeat of the biggest challenge of my life next week. Here is a recount of our team effort from last year:

Last year I faced the toughest physical challenge of my life to date. I joined an amazing team of runners in the 178-mile Reno-Tahoe Odyssey relay race.

Over the past year, setting fitness goals has been an important part of staying focused on my health, helping me lose 75 lbs. I started with a 5k, then 8-mile coastal race, then two sprint triathlons. But I wasn’t sure I was ready for the Odyssey.

The race turned out to be a life changing experience. I now have a deep, personal understanding that human limitation is an illusion. Pain is an illusion. You can subordinate the body’s desires to the will of your mind.

Maybe it’s just called runner’s high, but I have this new feeling of complete satisfaction and an incredible gratitude for this world, it’s people, my family and myself. Perhaps it is a bit of hyperbole, but I really felt as though I had conquered death that day, like I no longer have anything to fear.

On race day our whole game plan changed. The runs I had planned for were scrapped and re-shuffled. We were two runners short of 12 and two of our 10 had painful calf injuries. Our plan to each run three legs of the race turned into four.

My first leg, No. 5, was 5.8 miles, mostly down hill with a couple uphill grades. It was along the Truckee River at noon from a high dam. It had rolling hills sprinkled with snow and beautiful green meadows. I passed three runners and was passed by no one. I was inspired to move quickly because Jon, our team captain, had just completed the toughest leg of the race, No. 4, over a hill with 8 miles. He finished so strongly I had to hustle. I finished in 53:14.

My second run was very cold, at about 10 p.m., in to the city of South Lake Tahoe. It was 3.8-miles long and the vehicle traffic at night was a little scary. The grade was flat, but my perception was of a slight uphill grade. I had a lot of clothing on and it weighed on me. I felt sluggish. It was great to see signs of civilization: inns, lodges, bars and people on my way to the check point at Bank of the West on South Lake Tahoe Blvd. I ran it in 38:24.

Leg three was a 3.3-mile run from a fire station to Hwy 395, then to a shopping center. I really tried to move on this leg. I knew it was short, but it was also 4 a.m. and I was getting fatigued. At this point, I started thinking I was letting my team down, because most of them were running 5 or 6 mile legs or very steep legs, whereas mine were shorter and/or down hill. I gave it some juice and tried to keep up with faster runners. I did better than I expected and surprised my teammates, who were not quite ready for me. I did it in 29:28.

Originally we were each planning on doing three legs each. Jon and his friend Jeff had trained to make up a few legs just in case. But we had so many to make up, because of missing and injured runners, we all needed to pitch in a little extra. Our plan was to split up the last four legs among those who could take more. Since I had done some pretty easy runs, I knew I was needed.

After Virginia City, Jon took the run up over a peak of 3.7 miles. He said that if he was feeling good, he would keep moving down the hill. I was going to do an additional three miles on from where he stopped.

At the end of the 32nd leg run, I was prepared to run, but expected him to keep going. When I saw him coming, he gave the “slash across the throat” sign and I realized I was on for the next run. I felt the adrenaline rush, took the wristband baton and ran off at a good clip. I felt great.

At this time the team had been up for more than 30 hours. There was a little grumbling from exhaustion in the van. It sounded like we were out of energy and low on spirit. I had dark thoughts that we might not be able to finish. I realized that my commitment to take three miles was weak and not even half of the next leg. 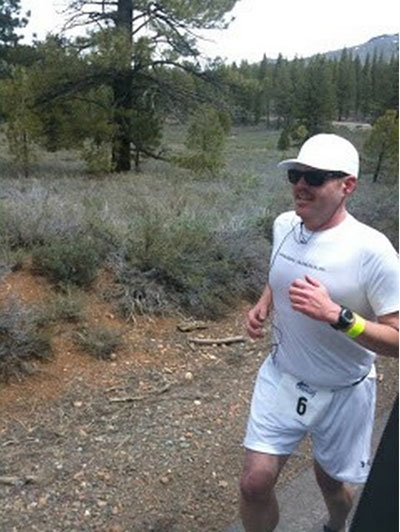 I was listening to P!nk’s Raise Your Glass and F’ing Perfect and reflected on everything I had done in the past year to get in shape and make it this far. It was a turning point where I could choose to be a man or a mouse. I decided I would do whatever it took to finish the race and I was starting by finishing this leg.

When I saw my team halfway down the hill at the 3-mile mark, I pointed at my chest and then down the hill. I threw down my hoodie. I shouted to the team: “I am going to finish this leg!” I gained speed and kept running. The team cheered me on.

I used a few thoughts to keep me focused on finishing the race. I thought of Siddhartha learning to overcome the pain and desires of his physical body during his ascetic years.

I thought of my Native American ancestors and imagined channeling them. Their spirits ran through me and energized me.

I thought of Einstein’s quote, “for us physicists believe the separation between past, present, and future is only an illusion.” I imagined that I had already run a marathon, an Ironman and had completed this Odyssey.

It was much easier than I thought. I was one of three runners on the team to do four complete legs. It was a 6.5-mile run down 1,750 feet of elevation. It was my longest run and the third longest of the 36 legs. I was done in 59.35.

I was prepared to do more, if needed. But our heroic team stepped up and saw us to the finish line. We finished in 29 hours and 32 minutes. Our average speed was 9:57 minute-miles, my average was 9:19.

This is a note I jotted down just after finishing my 19.4 miles: There is nothing more powerful than accepting your own death. I accept it. I am at peace with myself and with my life. I have conquered death. I am not afraid of dying.

I am very proud of my team and myself for completing this relay. I now feel energized to accomplish just about anything. I won’t give up ‘till I collapse.